The new building for BIOTOPIA will be positioned at the northern wing of Nymphenburg Palace, adjacent to the Museum Man and Nature. Currently, a former structure of the Ludwig-Maximilians-University is situated there: A plain building dating back to the 60s, which is not suited to house a museum and which is not under monument protection. Staab Architekten is known for its expertise in construction in existing contexts and has realised outstanding projects in this field throughout Germany. 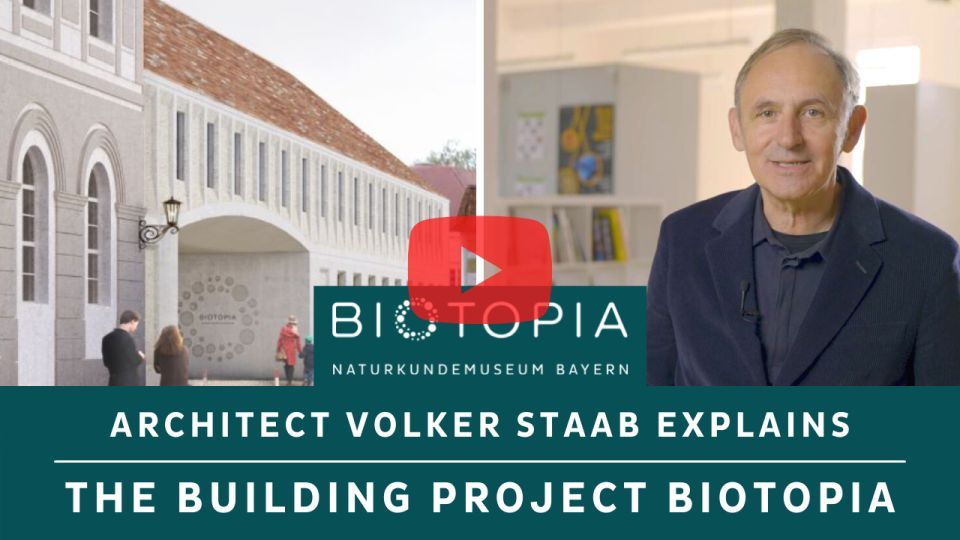 THE TASK: TO COMPLEMENT THE PALACE ENSEMBLE THOUGHTFULLY WHILE RENDERING THE MUSEUM AND ITS INTERNATIONAL RELEVANCE VISIBLE. 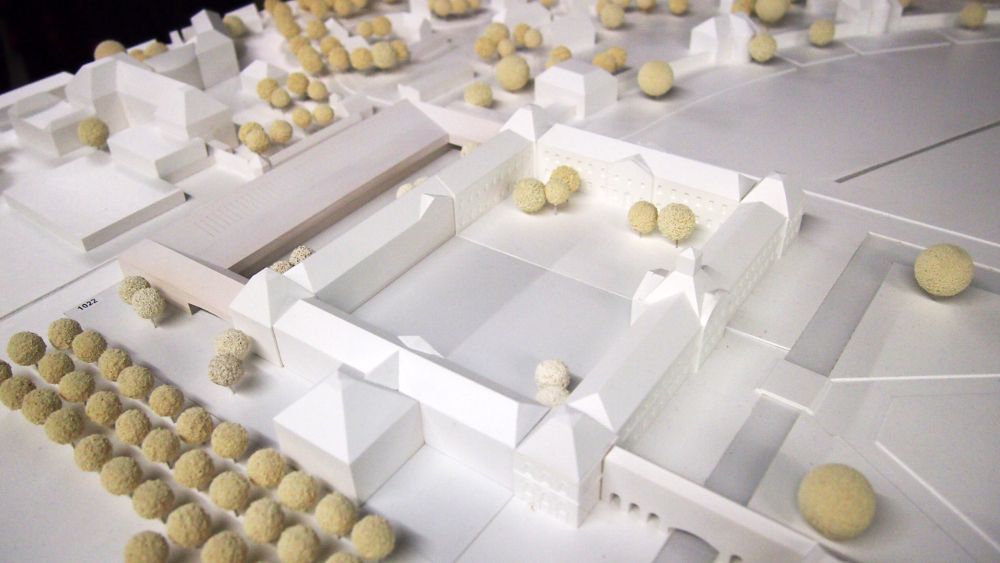 This section will be renovated according to monument protection regulations. In the future, museum workshops and administration will be housed here.

NEW BUILDING
The new building replaces the current structure dating back to the post-war era. It will then house the exhibition and event areas.
More Space

In total, the new museum's area will comprise 13,000sqm. The exhibition area triples from 2,500sqm in the Museum Man and Nature to 7,000sqm in BIOTOPIA.

As of 2014
The image shows the winning design of the architectural competition 2013/14, which was won by the prestigious Berlin-based office Staab Architekten. The new building replaces the current structure from the 1960s.
WHO IS INVOLVED?
In 2013/14, the Free State of Bavaria conducted an architectural competition in close consultation with the City of Munich and the responsible district committee. The Bavarian State Office for the Preservation of Historical Monuments and the Bavarian Palace Department closely monitored requirements regarding monument protection during the competition proceeding. Said institutions continue to be actively involved in the development process.
WHAT DID THE COMPETITION DESIGN DEPICT?
The competition design (2014) initially determined the basic architectural parameters. What has followed afterwards is a process of several years during which layouts and facades are developed further in coordination with all parties. 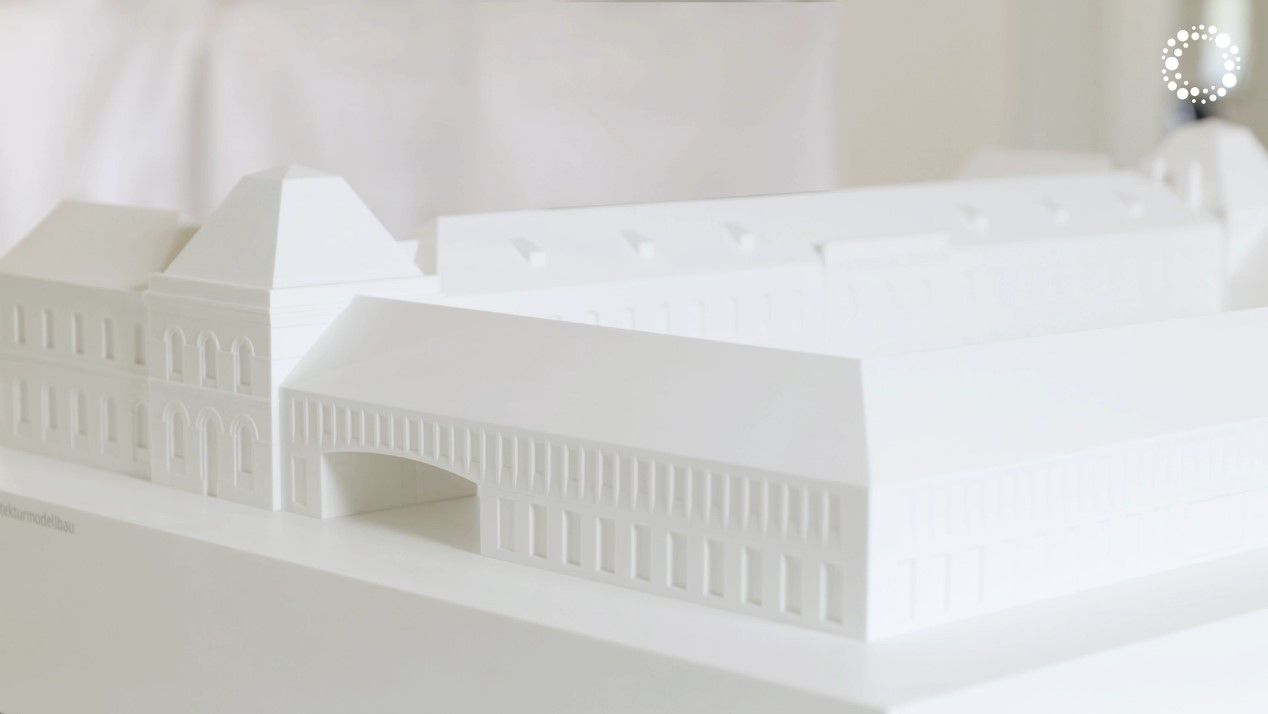 In accordance with the urban development framework plan drawn up by Josef Effner between 1715 and 1726, a modern, contemporary museum architecture will be created, which will house permanent and special exhibitions, open laboratories, a children's museum, a coral reef aquarium, rooms for education, a museum shop, a café, as well as event rooms and an auditorium.

The picture shows the current status of the architectural model, soon to be seen in the BIOTOPIA Lab. The competition design fits into the specifications of the symmetrical palace complex. The height, colour and simplicity of the historical architecture are taken up, and elaborate ornaments, gold applications and decorations are avoided - analogous to its counterpart in the south, the "Schwaigebau".

The work on the design of the museum is progressing continuously: the main focus of recent work has been on the further development of the facades, exterior surfaces and interior spatial structure. The plans put special emphasis on the specifications of the monument protection authorities and the comments of the State Office for Monument Preservation.

In September 2017, the architectural plans reached an initial stage of development and were presented to the public. During the further development, Staab Architects, taking into account the comments of the Bavarian State Office for the Preservation of Historical Monuments, had specified topics such as structure and rhythm as well as the materiality and colouring of the facade and, in addition, the structure and materiality of the roof covering.

Fall 2020: The architectural plans reach a new state of development.

BUILDING HEIGHT
The new building continues the historically designated height difference between the buildings of the palace complex and the adjoining sections. It adopts the overall dimensions as well as the ridge and the eave of its predecessor.
Materiality and haptic

The structuring and different surface treatments of the facades approximate the historical existing building in terms of haptics and colouring and create a contemporary facade that harmonises with the castle ensemble.

As of 2020
The outside appearance is of particular importance regarding the museum's integration into the historic Palace ensemble. On the one hand, the facade ensures the new building's harmonious affiliation to the unique baroque ensemble of Nymphenburg Palace. On the other hand, its task is also to render the museum visible and to welcome visitors.
JOSEPH EFFNER
Staab Architekten build on the visions of Nymphenburg Palace's architect Joseph Effner (1687 - 1745). Around 1715, he designed an overall plan for the Palace, which comprises building heights, segmentation and colours.

A matter of particular interest to the public: The refinement of the facade and the roofing. 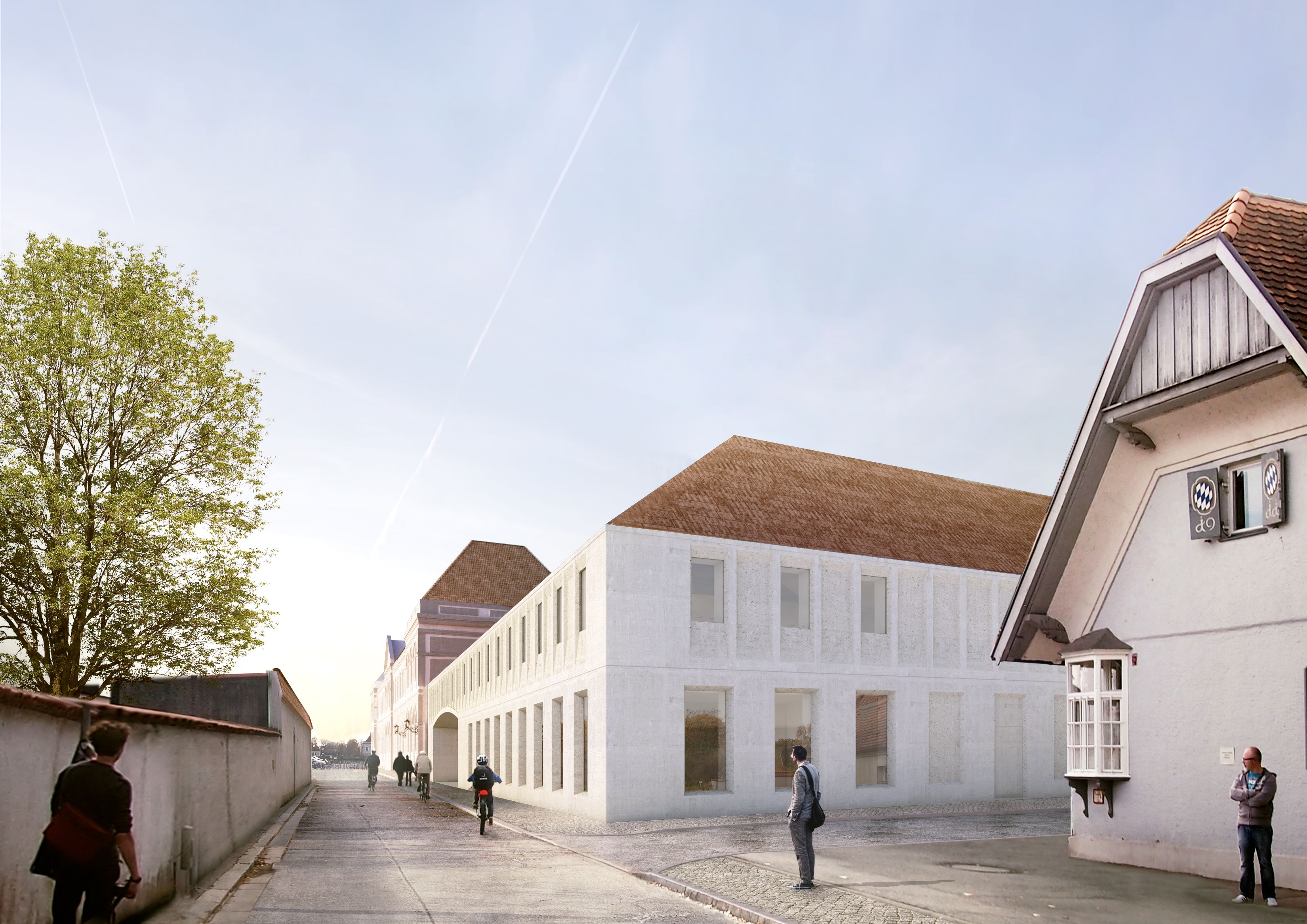 Main entrance to the Museum
The archway at the small face of the building serves as the main entrance to BIOTOPIA, leading into the museum via the museum courtyard.
Window openings
Generous window openings on the ground floor structure the facade rhythmically. More windows are planned on the upper floor.
Roof
The mineral ceramic roofing is adjusted to the neighbouring roof areas of the Palace.

With a reference to the historical colour scheme and structure, the new building now resembles the white plastered outbuildings with a plaster-like, mineral facade surface in a very light colour tone.

A distinct rhythm for the windows and the relief of the facade creates a segmentation which visually separates the ground floor from the upper floor. The rhythm of the facade design on the two floors is also transferred to the long side via a relief.

Precisely placed, large window openings on the long side of the museum are reminiscent of the historical passages and entrances of the palace complex. On the one hand, they provide an insight into the museum, and on the other hand they create a sense of calm in the exhibition rooms.

The address of the new museum is being built in the open inner courtyard. 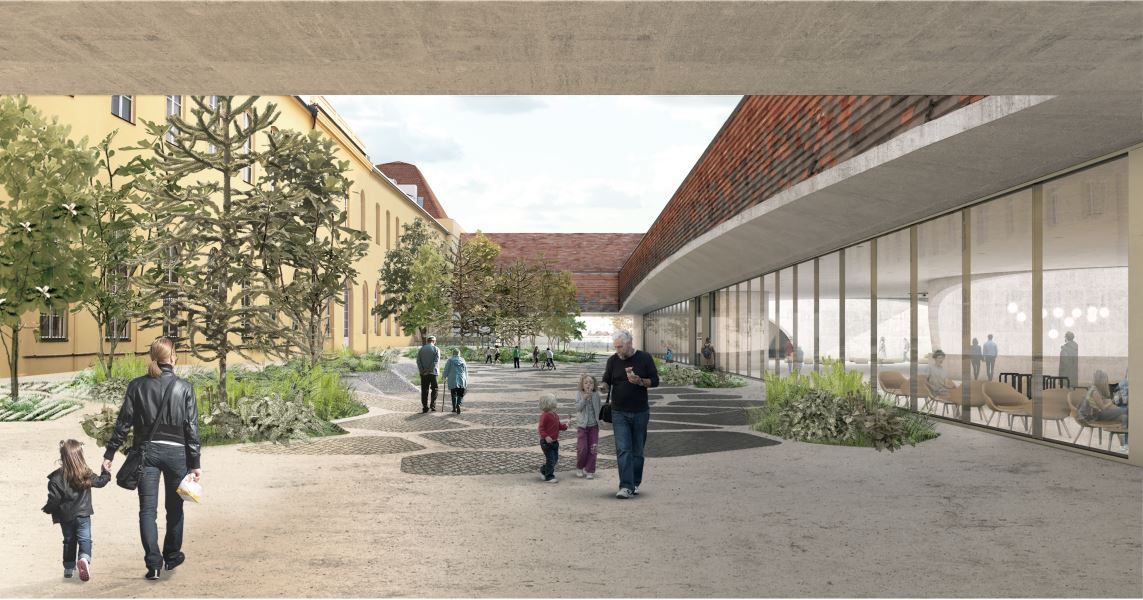 Archway
The archways on the opposite small faces of the building create a passageway from the Maria-Ward-Straße to the Munich Botanical Garden, taking up a historic theme of the Palace.
INNER COURTYARD

The inner courtyard is both the front and outer area of the museum and combines with the foyer of the new building to form a spatial unit.

DOORWAY TO THE PERMANENT EXHIBITION

In the inner courtyard is the central entrance to the permanent exhibition via the south façade. Four curved stair sculptures guide visitors inside to the various exhibition areas.

The main entrance to the museum is located in the inner courtyard. The courtyard and the freely accessible exhibition on the ground floor function as a spatial unit, which is intended to whet the appetite of pedestrians and guests alike for a visit to the museum. Here, a long glass façade turns the museum towards the visitors and provides insights into the exhibition. A restaurant on the ground floor of the old building completes the offer.

The landscape architects Atelier LOIDL developed a concept for the exterior space, i.e. the museum courtyard and the outdoor areas facing the palace park, which is formally based on a cellular structure. The cells are connected by a gently curving topography that compensates for height differences between the old and new buildings with plateaus, depressions, incisions and connecting paths. This creates a dynamic landscape of discovery in the courtyard, providing different atmospheres and generating curiosity about the museum. 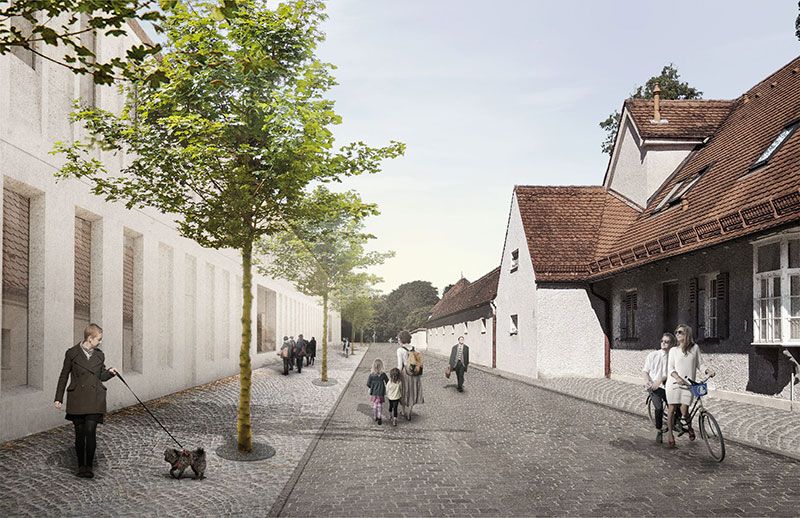 Relation to the surroundings

Preview of Maria-Ward-Strasse - long side of the future museum.

‘The idea was to create an open design for the Natural History Museum, but one that is embedded in its historic context. During the draft phase, we liaised closely with the user to flesh out the idea. By moving the lecture hall to the basement, space was created on the ground floor for a flexible foyer, exhibition and workshop area that radiates out towards the museum courtyard. The room structure assimilates the palace environment and can be adapted to future museum concepts without the need for major con-version work. The design is complemented by an open exhibition area and compactly organised lab spaces on the first floor. Down on the basement level, visitors will find spacious function rooms and temporary exhibition areas as well as an ecological observatory with an aquarium. Despite all the adjustments, the total floor area inside the building remains the same.’ 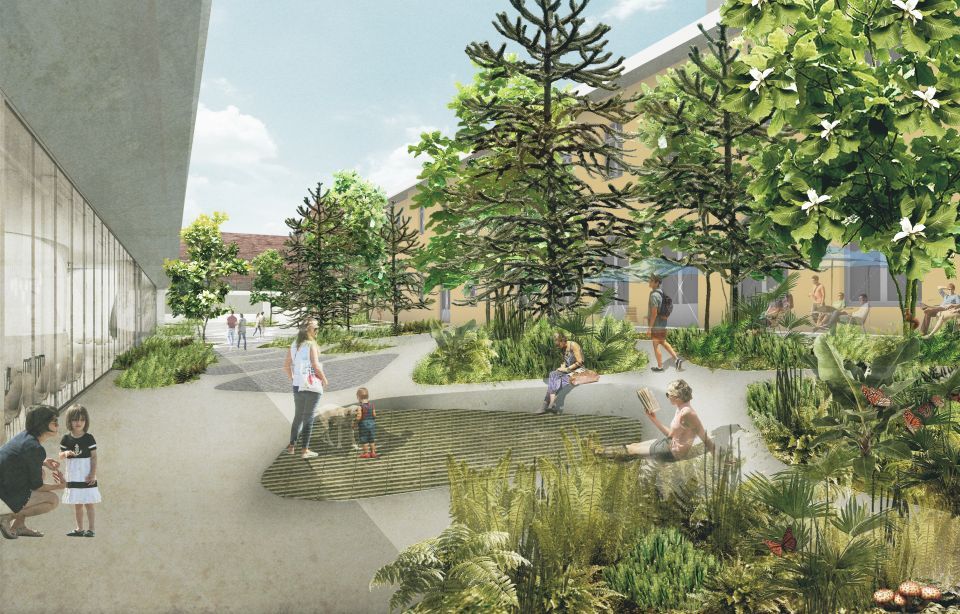 SUSTAINABILITY IN THE NEW BUILDING OF BIOTOPIA

Sustainability and energy efficiency play a central role in building planning for BIOTOPIA. The Sustainable Building Assessment System (BNB) developed by the German government considers ecological, economic and socio-cultural qualities as well as technical and process-related aspects throughout the entire life cycle of a building.